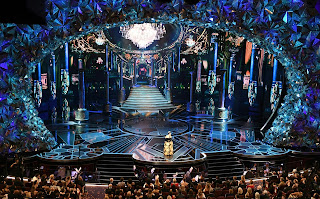 The 2018 Oscars are now history and, as per norm, they were long but I wasn't as bored as I thought I would be. I may have been mesmerized by the beautiful Oscar set that reminded me of Art Nouveau to an undersea kingdom. It was not at all tacky like so many were in the past...which I miss because the Oscars are supposed to be tacky so they, obviously, didn't get the memo. I thought some of the presenters were great like Ashley Judd, Annabella Sciorra and Selma Hayek. They were eloquent, without being nasty, and positive yet they showed emotion from what they had to deal with in the past. Rita Moreno wore the same skirt that she wore back in 1962 when she won her Oscar... she should have kept it in the closet and Sandra Bullock decided to ruin her face with cheek implants and black eye make-up that made her eyes look like 2 pissholes in the snow. The best presenters were Maya Rudolph and Tiffany Hadish who were laugh out loud funny. By the way, the In Memorium segment missed Nanette Fabray  which I think was a crime. Without further adieu, here are my answers to the questions I raised on Friday's post but I will do the first 2 questions last.

1.  What Drug Were They On?- Roger Deakins for Best Cinematography for Blade Runner 2049. This man has been nominated something like 13 times before finally winning and glad he won but, it is not so much what he said but how he was on stage that made me think he just sniffed a line of coke. I might get blasted for this but he was fidgety, touching his nose often...made me think of some of the clients I see. A runner up is Frances McDormand who is being heralded for a great acceptance speech but her nervous laughter and talking made me think she keeps a big knife in her purse-cue the Psycho music.

2. Worst Win?-Remember Me song from Coco. Now, none of these songs really were that great when you think of previous songs that were nominated and won, but this song was a bit of a drag. I would have either gone for This Is Me from The Greatest Showman or Mighty River from Mudbound.

3. Best Win? -I know some will disagree but I am so happy that Gary Oldman won for his tour de force performance as Winston Churchill. He  played Churchill so well showing, not only the man's strength but the depression that often plagued the man.

4.  Best Acceptance Speech?- I almost went with Allison Janney because her first sentence was great but I went with James Ivory who I thought was eloquent and gave a touching nod to his former mate, Ismail Merchant. Oh, he won for best adapted screenplay, "Call Me By Your Name."

5. Worst Acceptance Speech?  Ya know, I can't think of anyone in particular because no one dragged on or made snide comments so overall, they were boring thanking people.

6. Who Deserved a Punch in the Face?-I hate to say this because he is Canadian, but Shane Vieau, who was part of the trio who won for Best production design for Shape of Water, is an idiot. The moron purposely had his tux made with short arms, he wore running shoes and stupid sunglasses. Take the frikken sunglasses off you Jack Nicholson wanna be. He seemed to take pleasure in showcasing his assholeness on the podium and even backstage. Not impressed!

7. Whom Do You Wish Would Win/Lose?- I was hoping for Gary Oldman to win and I got my wish and I was praying that Dunkirk would lose in the big awards area and I also got my wish. Maybe I am a bit of the old guard but I found Dunkirk overdone  and "splashy". I also thought they made a big goof when I saw a new glass building and pretty pastel coloured buildings in the background on the beach in a couple of scenes. I was ecstatic that it did not win for best score! It was loud and irritating and took away from the film in my humble opinion.

8. Rate the Host- Jimmy Kimmell did a good job overall with making jokes about all the big news of the day(s) from Trump to his turnstile staff to the sex abuse scandal that has rocked Hollywood. I could have done without him taking some of the stars across the street to surprise an audience watching a movie. Overall he was good but nothing amazing. I can also say that if I was the host, I would have stared blankly at the camera, peed myself and, feeling like I was in some horrid dream, crawl towards the exit.  Now on to fun...

9. Best Dressed- There were some that were quite stunning like Allison Janney, Ashley Judd, Octavia Spencer, Greta Gerwig and Chadwick Boseman (Black Panther and a man) but I have to give it to Jennifer Garner who looked ravishing in this dress. 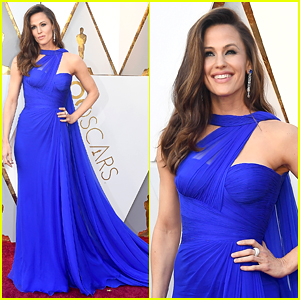 I would love to wear this dress.

10. Worst Dressed-There are so many to choose from that I could not choose the worst so I need your input and will put the 3 worst here and you choose which makes you want to wretch. 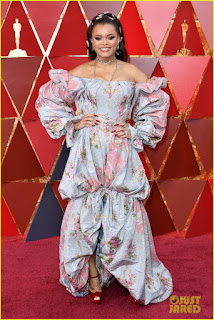 I was wondering what happened to my 1991 drapes. For any who care, her name is Andra Day 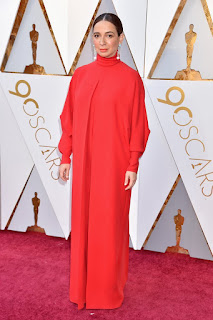 Maya Randolph and Tiffany Hadish killed it as presenters-they were hilarious but Maya's outfit looked like she came prepared in case Harvey Weinstein wanted to try to grope her-I call this the chastity dress. 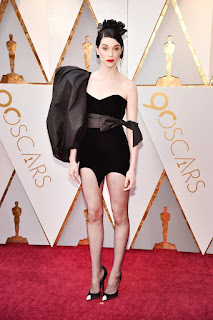 Her name is St. Vincent....um...yup. I have to find out what her real name actually is, maybe it's lady Bird:). Anyway, it looks like she just came from David Copperfield's show and she is trying to hide the Bird cage but one can see where she is hiding it...ghastly! 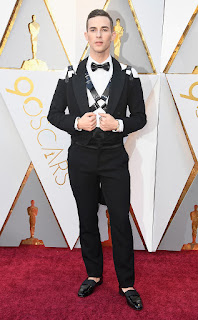 Adam Rippon-male figure skater decided to go all S & M on us and then forgot to put on his socks and proper shoes as they look like just nice slippers. I mean really! WTF?!

So your thoughts? How did you like Maya & Tiffany? Did anyone think Jennifer Lawrence layered on the makeup too much? Did anyone else think Jane Fonda was going to elbow Helen Mirren out of the way? Which nut would you pick as your worst dressed? Sorry for the lengthy blog post:)