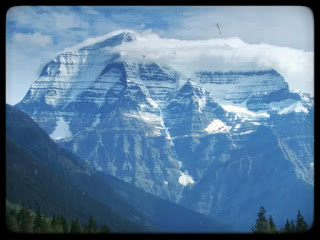 Just look at that magnificent mountain! No I am not talking about Nicki Minaj's huge ass but Mount Robson which is very impressive and we were lucky seeing the top as, most of the time, it is hidden behind clouds. We did see a black bear-a youngin' but the picture is not good so no bear photo. Oh and if you want to read Part 1 you can read about it here. 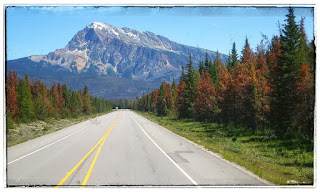 On the road again and this was a long day for my friend since everything was delayed due to the major traffic accident. I loved seeing all these mountains and views but, I have to admit my head flopped back and I slept again. I failed the test that Jeff gave me..oh well... Here is another mountain view 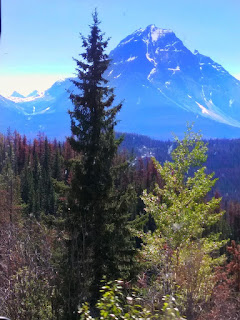 Stunning views travelling through the Rockies seeing snow, beautiful green evergreens but there is also a semi desert in one area which was unusual. We also saw the remains of a fire from the year before. This year, they are being hit with more fires...ughh 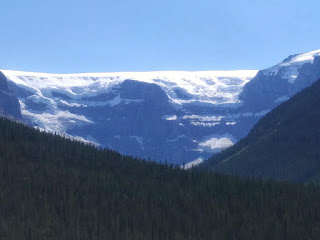 We stopped on the side of the road for this magnificent view of  Stuttfield Glacier. It was just an amazing sight where I took many pictures only to realize later, that I don't need 25 pictures of a glacier. 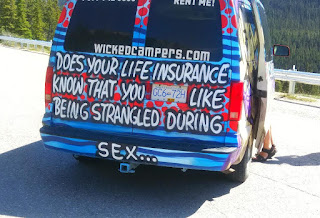 Yes...This was another sight at the glacier. Apparently, one can rent out these vans with each van coloured and written in bold with no political correctness in sight. I loved it! The side had a girl screaming with the words "Disco Sucks" . How could I not take a picture of this and I snickered when the people who were driving this van spoke...they were German..Hahahaaa. I would totally rent a van from this company. 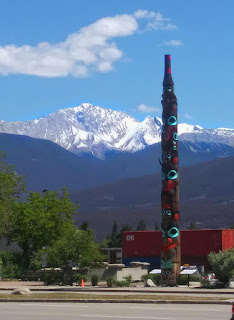 Finally, we made it to Jasper by 1pm! We were supposed to be in Jasper the night before and pick up the remaining chickens, er,,,I mean tourists at the Jasper Hotel by 8am so we were very late mainly due to that horrific car accident.  When I saw the cab of the semi, there was nothing left and I am surprised, gratefully, that he made it out alive. Now, onto happier times....despite the long delay, Jasper was so pretty. It is a small town with mainly gift shops, restaurants and hotels but the view was spectacular! 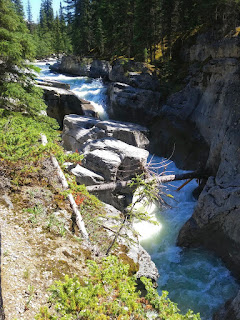 After us chickens got back on the bus, we kept driving but made a stop at this gorge with this beautiful water rapids carving its way down to its destination. I love anything having to do with water and enjoyed walking along the trail seeing this nature...just wonderful! 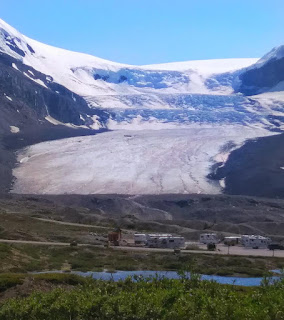 We finally arrived at Athabasca Glacier by 3:30pm when we should have been there by 1pm. We clucked our way off the bus, traveled on another bus to hop off and get on this glacier bus/tractor that was driven by a funny California valley Girl who was just too perky but I didn't mind. I walked on this glacier and it was a bit on the cool side but so much fun. I saw someone in shorts and a T-shirt checking out the glacier beyond the safety zone making sure all was well. If you look closely, the black small mass on the ice field are a bunch of tourists. 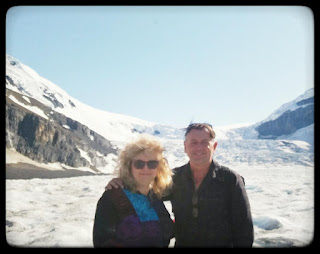 Jeff and I, or is that me(?) on the glacier looking so young courtesy of smoothing out the skin with photoshop. He outdid himself that day making sure the people who waited for so long, in Jasper, were well taken care of and making sure our feathers didn't get ruffled by something that was out of his control. Here one can really see his new haircut which I call the Prussian look:) 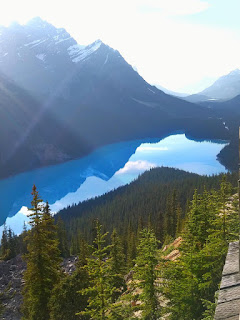 Near the end of our long journey we stopped for a look at this famous lake-Peyto Lake. The silt in the water creates this vivid aqua look. It is stunning and is often shown in magazines and films. We did not appreciate the mosquitoes that loved blood a little too much.

We finally arrived in Banff at 8:45pm when we should have been there around 6pm so it was a long day of delays. My friend was just about ready to cave, but he made it through to try to look suave in his white bathrobe..I just looked at him and laughed like hell. The delays were not just from the huge accident but a family of 14 chickens who would dilly dally and be late to the bus. Being late is a major no no for my friend who was just about ready to pluck them and send them to KFC. In 2 weeks I plan on part 3:)
Posted by Birgit at 8/03/2018