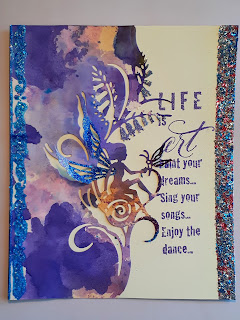 Fairy & the Unicorn- Anything Goes

I love fairies, always have and wished they were real. It would be so cool to see such pretty beings flying around the flowers. So I had this spare piece of paper that I used to wipe up some extra distress inks I had spritzed with water to use for another card. This scrap was laying around forever when I decided to play and see how my fairy diecut would look like. I was quite pleased that it turned out better than I thought. I sprinkled her wings in blue and the butterfly in purple sparkle before I tried a stencil to create a border using my sparkle paste that I coloured with some blue powder. Well, it looks like a long gob of goo...blue goo. Since I am not a perfectionist, I just kept it rather than destroy it nor did I want to cut that part off oddly enough. I stamped and embossed the sentiment in purple with purple sparkle. To add more bling, I took my double sided tape for the border and tried out some new stuff I bought. It is very, very, very flyaway and stuck to my clothing but I love the look. 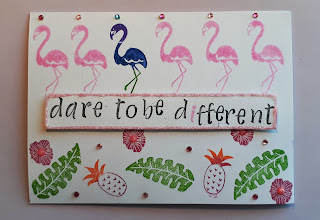 Animal Friends- Flamingo
Crafty Creations-Anything Goes
I have been wanting to create something, every month, for Animal Friends and, before I knew what was happening, the month was over. This time I made it under the wire and created this tropical card which was nice and simple. I stamped each letter in black except for the "i" which is stamped in pink. I wanted it funky so the letters are a bit off, just like me. I stamped the flamingos in pink except for one which is in the rainbow colours of green, blue and purple.... it is the rainbow month after all and I applaud all the people in the LGBTQ Community. I added the pineapple, leaves and flowers below to lend that tropical flair. I used pop up dots to raise the saying up, added pink stickles for the border and the flower centres and finished it off with some crystals. It has been pretty tropical here...disgusting actually, but I hope we get a bit of a break by Thursday.
Wishing you a great rest of the day!