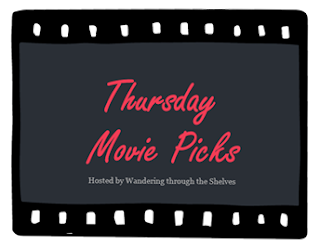 Oh, I bet you writers out there in the dark can have a field day today with this theme chosen by The Punk Theory. There are countless films based on books with many being good, entertaining and fun, a few being great and many that stank the high heaven. I hope you check out Wandering Through The Shelves to see what everyone else has chosen. Here are my 3 stinkaroos....

I might get some flack from this irritating romance but I can't help it.....this film sucks. The only redeeming quality of this film are the scenes with James Garner and Gena Rowlands who had chemistry and portrayed genuine love and affection for one another. The Garner character reads from Rowlands' notebook to her hoping she will register who she is and whom he is since she has Alzheimer's. We travel back in time to 2 young people who are attracted to one another but seem to fight, burp and fart around one another causing mayhem and irritation to this person watching this couple. Years pass, they kiss in the rain (oooh, that's original) before they burp, fart and fight knowing that they get under each others' skin like bedbugs but they can't be without one another....ok. You find out this irritating couple are the loving old souls...bulls&^! They would have divorced long ago or killed each other if I didn't go through the screen first to kill them. Ryan Gosling and Rachel McAdams did become a couple for a while but the burp and fart split many moons ago.

The book is great and I don't mind the Robert Redford version although what he saw in Mia Farrow I have no idea. The remake stars Leonardo DiCaprio, Tobey Maguire and Carey Mulligan in an over the top monstrosity directed by Baz Luhrmann who just threw up color, glitter, camera tricks, modern shit and everything else to create a colossal bore of a flick. Tobey(Where is he?) Maguire is the narrator and eventual friend of the mysterious Gatsby played by Leo who has many parties (being the 1920s and all) before falling for the whispy Daisy. Who cares, this film dragged so much and was so long that I lost a third of my life watching this dredge.

I read a few parts of this horrible, horrible book while in Chapters and was laughing at the crap I was reading. Barbara Cartland must be turning over in her grave. The chick who wrote this dredge plus 50 Shits Darker and 50 Shits Freed (sounds like books for reasons why one needs a colonoscopy) is laughing all the way to bank. When there are so many great writers out there, what did she do to get these published and made into movies that so many went to see. Why? Why have so many gone to see the slop..no, I have not seen any of these flicks of bad taste. I don't care to see heavy breathing, butts, boobs and whatever else that a good porn will do. I would rather see "The Sheets of San Francisco" or "Ramb-ohhhh" (Yes those are real) than ever watch this dribble.

So which Flicks would you choose? Battlefield Earth anyone??