Hi there everyone! I am thinking about featuring a film/TV star once per month for people to become acquainted or re-acquainted with some of the greats of yesteryear. I will try (the big word is try) to post this on the first Tuesday of each month. This month is my mommy's birth month so I chose a star that was born on her birthdate (not the year though). If you have anything to add, please do so in your comments as I do always read them even if I am shamed to say I don't respond right away (slapping my hand for that one). So, without further ado, here is my first entry... 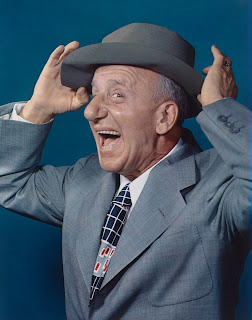 DIED FROM: Pneumonia. Had suffered a stroke in 1972 and retired after this.

MARRIED: Twice to Jean Olsen in 1921. She died , suddenly, in 1943 on Valentine's Day. She did have a heart ailment but was not expected to go so quickly. He was devastated. He married Margaret Little in 1960. There was a 26 year age difference(anyone surprised at this?) and stayed together until his death.

NICKNAME: The Big Schnoz or The Schnozzola. I think you can see why:)

This was a big man, not just in nose and comedy but, in heart.  He started in Vaudeville ending up with Eddie Jackson & Lou Clayton where they sang and Jimmy would burst out with a joke in between the songs. This became a trademark for Jimmy. Later on, as he became famous, he made sure his old friends were always on his payroll, no matter what, and they would often appear in his films or TV shows. He starred with Buster Keaton in 3 big hits of the early 1930s, but Keaton's comedic style was snuffed out by Jimmy's, not by Jimmy's doing either(think studio interference), and, along with Keaton's drinking, the studio stopped making films with them as a team.

He was known for his great love of children and would often give his time and money to their needs. He would often help the "Fraternal Order of Eagles" (helps kids who are abused or handicapped) never asking for a fee when he performed nor ever asked them to pay for his travel or lodging but to take that money and give it back to the kids. This order changed their Children's Fund to Durante's name because he had, personally, raised over 20 million.

His distinctive voice, Lower-East Side mixed with screwing up the English language talking, and boisterous play made it easy to caricature him in animated shorts plus he was a hit on radio and TV never mind movies. On his Radio and TV Shows, he always ended the program with, "Goodnight Mrs. Calabash, wherever you are." For decades, people wanted to know who this lady was. There have been more than one theory but I believe it is the one where his first wife could not say Calabasas, CA and shortened it to Calabash, when they drove through the city. It became an in-joke for the two of them and he continued this on his show. Many of you heard his voice as the narrator of "Frosty The Snowman" and singing the songs from "Sleepless in Seattle". Actually, his musical recordings have been heard on many films even that dreadful "Joker" flick.

Blondie Of The Follies-1932

It Happened in Brooklyn-1947

This just cracked me up when I watched this movie (Jumbo)

His signature tune that he composed and Ben Ryan wrote the lyrics.

I hope you enjoyed this read and if you have anything new to share (or correct) be my guest. Have a great day!