Star of the Month 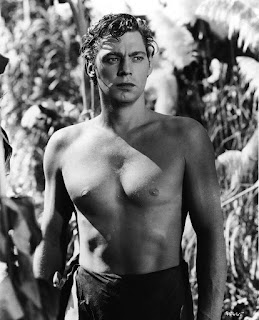 MARRIED TO- 5 TIMES! (HE WAS A BUSY BOY) MOST FAMOUSLY TO LUPE VALEZ

TALENTS-FAMOUS OLYMPIC SWIMMER. THE FIRST TO SWIM THE 100 METRE IN UNDER A MINUTE. WON 5 GOLD MEDALS AND 1 BRONZE IN WATER POLO. SET 67 WORLD RECORDS.

KNOWN FOR- HIS TARZAN YELL WHICH HE CAME UP WITH

I chose Johnny because he is born on the same day as me and I like him better than the Marquis De Sade who was also born on my day. (ughh, why him, why not any other writer but him). Johnny has German heritage but was born in what used to be the Austrian-Hungarian Empire and is now Romania. His family, with him in tow at 5 yrs old, immigrated to the U.S. and started life anew. He loved to swim and excelled at it winning in 2 Olympic Games in the 1920s, plus setting 67 world records. He got noticed by some scout or other when Johnny was doing an underwear ad because they were looking for a new Tarzan.

He became THE Tarzan and made several pictures as the loincloth man who swings to the best vines. He meets Jane and, with his trustee companion, Cheetah, they live in the luxury of his home. Later, they find a baby and name him Boy(how original). Cheetah, apparently, had a thing for Johnny and got very jealous of Maureen O'Sullivan when they had to do romantic scenes. The ape would bite her when give the chance.

Johnny was a life-long advocate for eating well and exercising devoted to the Kellogg school of dieting and healthy living (Yes, that Kellogg who was a strange, strange bird) but he ran into many health issues in the 1970s. he broke his leg and hip and almost died from an infection and then developed lung issues etc. As a side note, he saved many people from drowning in a boating accident, in 1927. He was a life guard in Chicago training for a marathon when this accident happened. Apparently Johnny was known to have saved quite a few people over his life time.

Johnny was also very famous for his affair and marriage to the loopy Lupe Valez who had one fiery temper plus bedded many, many, many.....did I say many?, men.  She had a habit of stabbing or firing a gun at her lover/husband as well. Gary Cooper was shot at by her and, I think, Johnny was stabbed but I could be wrong. It was superficial, thankfully. Yes, the marriage ended in divorce.

I always thought he was THE best Tarzan even though this Tarzan character is way off track from the actual Tarzan of the Edgar Rice Burrough books as Tarzan could read, write and speak eloquently in the novels. His yell is perfect which, even if you have not seen the films, you know his yell. Carol Burnett was great doing that yell on her famous TV variety show plus many others made fun/paid homage to it.

Tarzan and The Amazons-1945

Tarzan and the Leopard Woman-1946