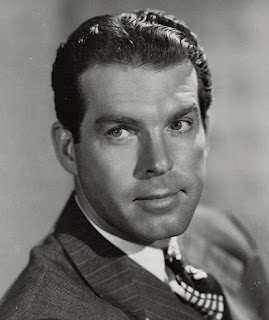 FRED MACMURRAY
BIRTHDATE: August 30, 1908
DEATH: November 5, 1991
AGED: 83 yrs
DIED FROM: Pneumonia  but was dealing with leukemia plus other ailments
MARRIED: twice with the 2nd being the actress, June Haver
CHILDREN: 4 all adopted. The first 2 with his first wife; twins with June
NICKNAME: Bud
TALENT: Star athlete in High School(football); saxophone player; Singer; excellent in leather crafts like saddles.
KNOWN FOR: his extreme stinginess; the model for Capt. Marvel!; golfing; Republican
This is a forgotten star in many ways although he did many films, starred with many a leading lady, including 7 times with Claudette Colbert. He started off  singing and dancing in theatre but became most famous for his less than nice characters  in “ Double Indemnity” and “The Apartment” but also his affable, nice guy roles especially in his many Disney movies in the late 50s and 60s and his famous TV role as widower, Steve Douglas in “ My 3 Sons” that ran for 12 years.  He was not one to bed every leading lady or starlet although I am certain he was not virginal but he seemed to be true to his 2 wives. His first wife died of cancer in 1953 and he met ( through John Wayne) and married June Haver (after she left the nunnery) in 1954 and stayed with her until his death. He loved his hometown of Beaver Dam, Wisconsin mentioning it almost every time he was interviewed and even had it in some of his movies. He refused to be a bad guy in any more film roles when he was slapped by a woman while at Disneyland with his family. She took her kids to see "The Apartment" not thinking it was a film where he played a real jerk. Suffice to say tgatcwoman was an idiot.
He bought a large piece of land where he raised cattle and farmed enjoying this country life. This land is now owned by the Gallo family, famous for the wine and his daughter lives there and promotes  what her dad started. At one point, due to his shrewdness in real estate, he was the 4th richest person in the United States. In fact, this man knew how to shove a coal up his ass and have it come out a Diamond. His stinginess was legendary often bringing his lunch to work and tipping spariningly.
When he started his TV venture, he orchestrated a great contract, not only money wise, but he wanted all his scenes filmed first. This meant that he only worked 65 days in a year so he could play golf and be on his farm with his family. The other players on this TV series had to play to someone off screen when talking to “dad”  and had to act around what Fred wanted.
His later years was marked with much illness from emphysema, ( he was a huge smoker) a severe stroke, leukaemia and finally pneumonia.
He may not be one of NY all time favourites but I think he should be more well known than what he is today.
FILMS
1. The Gilded Lady-1935
2. Alice Adams- 1935
3. Honeymoon in Bali-1939
4. The Lady is Willing-1942
5. Double Indemnity- 1944
6. The Egg and I- 1947
7. Never a Dull Moment- 1950
8. The Caine Mutiny-1954
9. Good Day for a Hanging-1959
10. The Apartment- 1960
DISNEY FILMS
1. The Shaggy Dog-1959
2. The Absent-Minded Professor-1961
3. Son of Flubber-1963