What i Watched in August 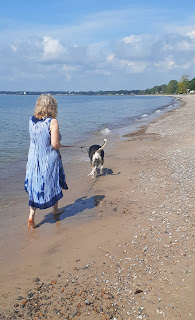 That's moi with Harley on Lake Erie wishing I brought my bathing suit. I do more than watch movies :)) but, at night, I will put in a film which hubby and I watch. This is what I saw in August...

Excellent Hitchcock film. Not as good as his golden films but better than I thought. 2 gay students kill a "friend" for fun, stash him in a huge trunk and have a gathering of people, including Jimmy Stewart as their former professor, just for the kicks. It's an experimental film for Hitchcock to film it as one continuous shot. There was only 10 minutes before film ran out so the camera centers on the back of someone for the change in film. It's a trifle annoying but nothing major. Stewart Granger and John Dall are excellent as the killers.

Tippi Hedren plays a madcap heiress who buys lovebirds to bring it out to a lawyer's home in a small fishing village. Little does she know that the birds, not the lovebirds, are very, very angry and about to cause mayhem. I feel this film is all about Hitchcock's mind. Yikes!

Willem Dafoe plays Van Gogh during the time he ventures down to the South of France, Gauguin's visit, ear coming off, visit to the sanitarium etc.. This is more of a character study than a biography. It's good but I still prefer Kirk Douglas as Van Gogh.

WW2 movie about the allies trying to stop the Krauts from getting that bridge. It's a good war flick starring George Segal.

Burt Lancaster plays a Frenchman( go with it) who has a high position on the train yards and is a leader of the Resistance movement. This leader now must try and stop this nasty Nazi from taking priceless works of art out of France and into Germany. Excellent movie based on fact.

Liam Neeson plays the title character who values honour over anything. When a nasty dandy wrecks havoc over his home, he makes Rob very angry. Based, somewhat, on the actual Roy and events. Well done, acted and photographed. It put Liam on the map

Ed Norton's baby, since he directed and stars in this film about a very smart PI wannabe, with Tourettes, who is trying to solve the murder of his boss. Better than I thought it would be. Clearly, he loves the old films of the film Noir.

Another film based on a true story starring Judi Dench as an old lady who, for decades, gave over top secret documents to the enemy thinking she was defending her land. Of course, it's wonderfully acted by Dame Judi. Quite a nice gem.

Russell Crowe plays a homicide detective watching over a young man, who killed his parents, when he was a teen, let out of jail for delinquents. Crowe believes the kid is a psychopath and serial killer. On another storyline  this sad, troubled girl  who lets men use her, has an unhealthy wish to meet the young man. This is a did he, will he, wtf is that little girl thinking kind if movie. Not an uplifting one but not bad. Not sure I'll watch it again any time soon.

This is the 3rd in a trilogy but you can watch each separately. Takes place during the last days of WW2 where we see men trying to stay alive but also the prejudice the African American men felt while fighting for their country that treats them like shit. It's not great by any means but, again, better than I thought it would be. I did like the fact that they showed tgat not all Germans were Nazi loving vampires wanting to bathe in everyone's blood.

I watched the film a couple of month's back but finally saw the commentary by a film historian and really enjoyed it. THE film is excellent and I loved listening to all the little tidbits even though I knew most but it was beat to hear some extras on this great film.

I loved watching this show with Q being a pain in the ass to Picard sending him and his small group into an alternate reality. Now everything's changed to the worse and they realize that it changed back in..yup, our time. They must go back in time and find out what needs to change..or not change to set things right. Along the way we learn more about Picard and what makes him ...him. I enjoyed it and don't care if they screw up the prime directive..who cares...it's fun. it still playing so I don't know the ending but this has the Prince of Wales involved. You have 8 artists who do a craft that is slowly becoming a, somewhat, lost art from forgers, and weavers to marble sculpting and glass making. Each learn the others' craft before, at the end, the Prince chooses a craft from one that  he feels  is extraordinary. I'm enjoying this and looking forward to the ending.

I saw a picture of this lady, in my Life Magazine book of famous photos, when I was a kid, and always wanted to know more about her. I instantly disliked the Daughters of the American Revolution for being a bunch of prejudiced prigs for not allowing her to sing in their hall. The great Eleanor Roosevelt, told them off  took her name off of their list and set it up so Marion could si g in front of the Lincoln Memorial. This lady could sing!!! A contralto,  soprano who could also sing Alto brought many kings, Queens and the ordinary Joe to tears in Europe only to face bigotry in her own homeland just makes my head shake in disgust. If you ever get a chance, watch this.

Lengthy.. sorry. Have a fab weekend everyone