Last week I gave an early Christmas gift to my hubby which was an outing to see the Pink Floyd Tribute Band and they were amazing! My hubby loved it and, as a tribute band, he gave them a 5 out of 5 and he saw THE Pink Floyd back in 1975. I found the band a bit too loud for the venue and the sound kick back would verify that but, I bet, they are used to playing to bigger venues. I just took some Kleenex and placed it in my ears. What was funny was, during intermission, I handed out some tissue to people near me who also placed them in their ears. Most people were, ahem, older and I could hear people talk about their sciatic nerve acting up and the loudness...made me laugh since these people were the teens and early 20s crowd who smoked up, drank and watched this excellent band. One of my favourite songs, “The lunatic inside my head” lyric, I already talked about in an earlier post but I chose 3 that I thought this band did justice. Let me add the 3 women, who were the back up singers, just slayed it especially the gal on the right hand side who just nailed the singing of that lady in the original song.

I remember when this came out and thought it was really “Neato” ...I was a dork but, yeah, I used that word often back then. This song was written by Roger Waters which is, somewhat, autobiographical. I thought the animation from this song was brilliant and loved the kids who sang on this great song.

Since I was a Credit Counsellor, am now a BIA Insolvency Counsellor and people are dealing with mega costs in groceries and gas, I thought this song quite apt. I also thought it had a brilliant opening which was written by Roger Waters from the great Dark Side of the Moon Album. I don’t think the lyrics or any other part of this song is dated.

I found out this song, with the great Clare Torry as the female vocalist, was never given any credit until many years later. She took Pink Floyd to court to get the recognition she deserved plus a part of the money. Originally, she went into the studio and, I think, on the 2nd take, she sang  her piece as if her voice were an instrument...which it is. She is now given credit along with Richard Wright, for the composition of this song from The Dark Side of the Moon album. The lady who did this piece last Thursday just nailed it.

We so enjoyed our evening out. 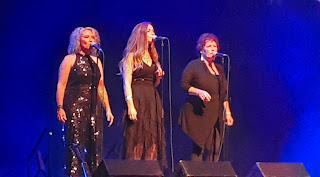