Kaspar the Disaster, I'm going to send you to Jasper.

The last pussy cat is our newest and youngest...Kaspar...German from Kaspar Hauser. We were in our local Petsmart buying food and my hubby said he was going to look at the cats. Before I could say, "Noooooooo", he was off and the cloud of dust was all that was left. After paying for the food, I went to see what my hubby was up to which was no good. He wanted to get a pussy cat and my head hung low because I knew there was no dissuading him. I saw this quiet tuxedo cat sleeping  and not doing much else and showed him to my hubby. He wanted this pussy cat so we paid for this bundle of joy. When we got back, I was not convinced to add yet another to our brood  and next morning, my hubby said we would  not get him. That morning, at work, all I could see in my mind was that pussy cat with one tear dropping from his cute face so I called my hubby and gave the ok.

We picked up Kaspar who was one sick kitty and we were not happy! We called Petsmart, who are connected to the Humane Society in the Niagara Region, and they told us the pussy cat came from the Fort Erie SPCA. My hubby contacted the Fort Erie SPCA, who found the little dickens on a golf course, telling them the pussy cat had a bad cold and his ears were infected with ear mites! The person he spoke with told us they have students who were to care for the animals but this was unacceptable (No kidding! They should check on the student's work). They gave us funds for the vet and we had to quarantine Kaspar until he was aok which took 3 weeks.

Now, this pussy cat turned out to not be the quiet type by any means, meowing for his pappa, his toys and, if he can get into mischief, he will. He already helped take the wallpaper down in the bedroom which made us revamp the bedroom. He likes to remodel our wood around the doors and if he tries this on the old wood, he will become a violin:) He has fallen in love with my hubby and vice versa so he gets away with murder! The water bottle does come in handy every night since he demands to be played with...often! He can run up and down the halls like Speedy Gonzalez on cocaine and then he konks out for a much needed nap...usually next to hubby. He loves receiving licks from Jade but not the paw bash right after. As my hubby says.."Kaspar, my little disaster. I'm going to send you to Jasper!" He is full of beans (both Jaspar and my hubby) and we love him...our little entertainer.

Name: Kaspar(after Kaspar Hauser)
Age: 2 years...the nutty years
Nickname: Kaspar the disaster, Cutie Patootie, Snookums, Snidely Whiplash, Hitler (My dear friend nicknamed him this).
Loves-birds outside (not allowed to be near them, just watch), be played with, belly rubs, being held (most of the time), redecorating
Toys-the string with the feathers at the end-he will jump high up to grab it. Laser, my feet under the blanket, balls of paper-he goes nuts! 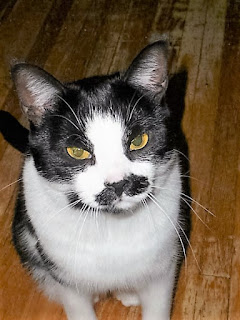 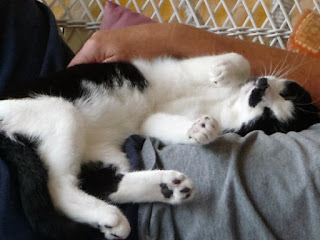 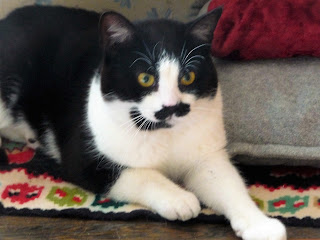