I have to say, I am a dog person even though we have 5 cats and I love them so very much. Actually, I am an animal person but, even when I was a little kid, I loved the wolves and I would go up to any dog without fear. Back in 2009, my hubby and I went to PetSmart to buy some cat food and there was an adoptathon going on for dogs rescued from Louisiana. They were not Katrina dogs but just poor dogs that were ready to be euthanized since there are many kill shelters in the States. We were not expecting to get a dog, famous last words, but then my eyes met Wallace. All the other dogs were barking, wagging their tail and being, well, dogs. Wallace was in his crate way in the back as far as he could get, terrified beyond reason. We were there for 2 hours because I knew this dog was a special case...a nut case to be exact but he came part of our family. I named him Wallace, not after Wallace and Gromit (I love them) but after William Wallace who was a brave Scotsman.

Wallace is not brave, in fact, he is a bona fide chicken shit! He was so scared of people, the outside, everything that he would not eat for the first few days. I actually believe he had never been on a leash and ran wild around Louisiana. He spent months in his crate,security blankie,  as we slowly trained him to not do his business in the house, get used to his surroundings and get used to us. My beautiful Katie, My black lab who is in heaven with my dad, really helped Wallace. We tried everything from Rescue Remedy to even an anti anxiety med but to no avail-our Wallace has anxiety issues up the wazoo. We brought him to 3 different behaviourists and tried all they told us....yup, he is still a chicken shit but he is our chicken shit.

I am happy to say that we no longer need him in the crate-that went after a year, he is all happy and goofy in our home and he comes up to most people, although he still is wary of my brother. He still shakes and quakes the moment he realizes he is going for a walk and will try to hide in a corner but that is just him-he is agoraphobic. I can't walk him because of my joint problems since he has literally taken my shoulder out of its joint 3 times, thankfully I can just slip it back in but then I can't do much for a long, long time. When my hubby walks him, he can let him off his leash and, like a bullet, he runs straight home never veering off the sidewalk. I believe he was shot at in his young days because he can't go out when someone is using the roofing gun and I have to mute the TV when there is shooting going on in the program.  I just love it when he barks and comes to me when I come home giving me lots of kisses on my chin.

Name-Wallace
Age-7 years
Nickname-Mein Schatz, Hoover, Ya nut!
Loves-Cat food-wouldn't eat his dog food unless we mixed it with some cat food(now he is aok with just dog food), loves apples, nuts, broccoli, yup he is our freak. Jade
Toys-His kong-demands it around 9pm every night so gets a treat with some peanut butter. Cat toy, kleenix (disgusting). Can't give him any stuffed toys-eats them 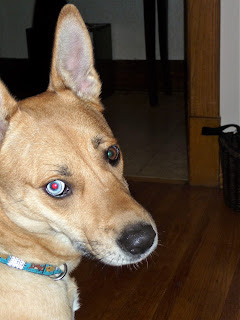 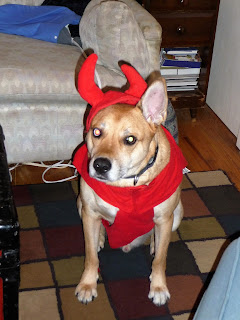 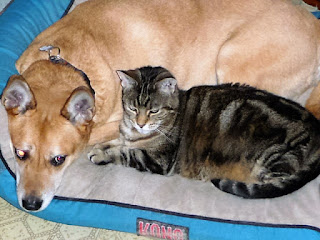