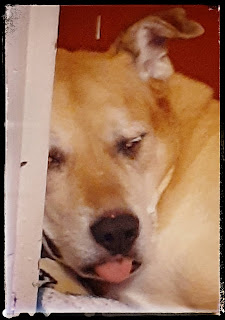 Here is my cutie, Wallace, sleeping away with his tongue out. I had to post this because he always seems to diss my brother. My brother has tried, all these years, to have Wallace come to him but...nope, my mentally challenged dog still has a roadblock when it comes to my brother. Why am I mentioning my brother? Well, he is a dynamo when it comes to most music and has an extensive record, yes, record collection. He  has a true love of blues but also classic Rock, Jazz etc... He is not into Classical and Broadway/Musical pieces like me but he has an appreciation for them.  I asked him which 3 songs truly resonated with him when he was a teen and he gave me his 3...

Back, many moons ago, when my brother got his driver's license, I could ride with him to our high school (which I hated-that school was horrible for all the bullying). He would drive, I think it was his 1976 Astre (which I later inherited) to Welland, pick up his friend, before we headed to that school. All this ABBA loving gal remembered was listening to Jimi Hendrix whether it be Foxy Lady, Joe or his version of the National Anthem. I tried to think up songs from musicals, ABBA, ELO or classical but Jimi drowned it out. I have to say, I now have a deep appreciation for Hendrix and his music and enjoy listening to some of his songs. My brother said this is a song that deeply resonated with him.

This is one song and album that I loved listening to from the get go because you can hear the influence of classical plus it sounds dream like, not unlike the Moody Blues..to me that is. My brother mentioned this song first to me which was surprising because I thought it would be Jimi. I remember him showing the album cover to my parents and my mom giving the shocked "Aghh" sound. He also showed the album to our Uncle Harry and Tante Marlene who were snobs, living in the Ann Arbor Hills and only loving Classical. I just recall my Aunt looking at the album giving  "Mmms" alot but don't recall much else. I wondered why he showed this to them since I knew they would not like it at all, shock value I am guessing. Their loss.

I never heard of this song but my brother did, of course, and early making quite a mark on him. Now the words and music resonate even more since we all have lived a lifetime.

I hope my brother reads this and can add to what I have written because i know he can add so much more.