Looking Back, One More Time 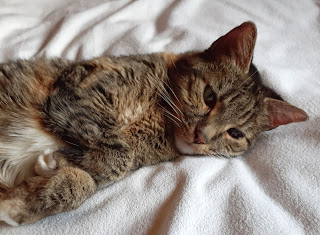 This is our Lucy who is over 15 years old, thin, thin, thin and eats everything in sight. She is also the sweet one who decides to place her paw on my face at 3am. We tried giving her pills once, this smart cookie would swallow the pill, or so we thought, only to find the pills hidden behind furniture. Bless her...ok so Janus is not done with the past yet so I am presenting 3 songs of yesteryear....

I have to say I do like this song which has been done many times over since Irene Dune Sung it in the film, “Roberta” which also stars Fred Astaire and Ginger Rogers plus Randolph Scott. It was written by Jerome Kern  with lyrics by Otto Harbach. I think it’s a nice song even though I do love “Smoke Gets Into Your Eyes” from the same film.

This song, written by Harvey Schmidt with lyrics by Tom Jones, is from the Broadway show, "The Fantasticks” in 1960 and was introduced by Jerry Orbach known more for Law & Order and Baby's Daddy from “Dirty Dancing”. This version might be from a,  "Night of a 100 Stars", which I'd like to see again. I actually love the simple way he sings these lyrics as it makes me think nostalgic.

My brother mentioned this song last week in his comments and I listened, remember it well and really like it so I thought I would present it here. Funny, Harry Chapin debuted this on the Johnny Carson Show and so many called and wrote in( must have been fast mail) that he came back the next day for an encore performance which was very rare on the Carson show also known as The Tonight Show.

Let’s see what other songs you can think up.