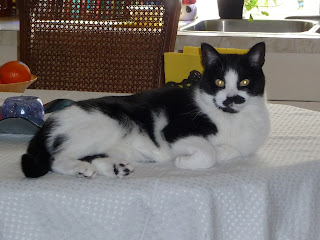 "Get off the table!" I yelled...Kaspar...."Yah, ok, let me ponder that while I stare at you." January and soon it will be Little Christmas or 3 King's Day. I know there is a 3rd title for January 6th but I can't recall. This is actually when the Ukrainians celebrate their Christmas which is when the 3 kings finally make it to see the babe in a manger. If I was a Ukrainian, I would feel mighty on edge right now and I do, even though I am not a Ukrainian. On a better note, I find January one of reflection, hope, fears, what will happen next?, and hating winter (I don't). Anyhoo, I thought it fun to listen to some memories so here are 3 picks from me to you.

This song became the hit for the film, "The Big Broadcast of 1938" won the Oscar for best song and became Bob Hope's signature tune for the rest of his career. It's about a divorced couple who meet and reunite by singing this song. It was composed by Ralph Raingert with lyrics by Leo Robin. I always loved this song.

2. MEMORIES-THE WAY WE WERE SUNG BY BARBRA STREISAND-1973

This major hit song came from the film "The Way We Were" starring Barbra Streisand and Robert Redford and remains a great song while the film is romantic hoo haa. It was created by Alan & Marilyn Bergman and Marvin Hamlisch. It's all about love and how wondrous it all was before it went to hell and a hand basket. (I think that's the cliche saying). Funny, it was not even up for a Oscar nom.

Forget Cats, the film version which I still want to see, I went with the original Broadway recording with Betty Buckley in the role. She played the mom in "Eight Is Enough" a TV show where dad marries this lady after his wife dies. I had no idea Betty had such an amazing voice until I saw her perform this on Johnny Carson. I bought the album right away and I actually saw this musical 4 times, somehow. Elaine Paige originated the role of Grizabella, the former glamourous cat, now old and mangy, on the London stage in 1981, but I prefer Betty Buckley singing this since she originated it in North America and nails it. Barbra Streisand also sang this song which many people prefer. I listened to Jennifer Hudson sing it and it's ok but not a favourite and that white cat, who likes smelly cat, can't sing! Oh this is  from Andrew lloyd Webber from the poems about cats by T. S. Elliot.  Man, I have to see this movie.

Looking back...any memory song you can think of?