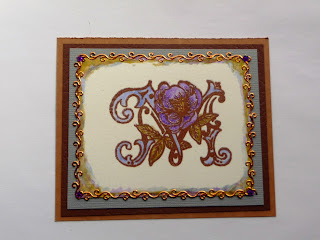 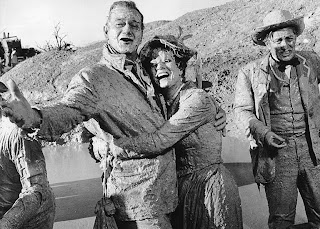 DIRECTOR:Andrew V. McLaglen
STARS: John Wayne, Maureen O'Hara, Yvonne DeCarlo, Stephanie Powers, Patrick Wayne
PLOT: Big man of the town is trying to help the Native Americans but his long gone, but not forgotten, spitfire of a wife blows into town with their daughter in tow.
QUOTE: You've caused a lot of trouble this morning, might have got somebody killed. Somebody oughta belt you right in the mouth, but I won't....I won't...The Hell I won't!
OSCAR NOMS: nil
OSCAR WINS: nil
LOVE: The camaraderie of all the stars
FAVOURITE SCENE: The mudpit scene
FAVOURITE CHARACTER: Katherine Gilhooley McLintock (Maureen O'Hara)
TIDBITS: Everyone loved making this film and had a great time because it felt like family. Yvonne DeCarlo was down on her luck and John Wayne helped her. When the stuntmen wanted hazard pay for doing the mudslide scene, Maureen O'Hara thought they were silly and did the stunt herself with John Wayne despite it being very cold(filmed in November).
SIX DEGREES (MORE OR LESS) OF SEPARATION: John Wayne starred with Robert Duvall (True Grit) who starred with Michael Caine (Secondhand Lions) who starred with Brendan Fraser ( The Quiet American). Brendan Fraser starred in...

DIRECTOR: Stephen Sommers
STARS: Brendan Fraser, Rachel Weisz, Jon Hannah, Arnold Vasloo, Kevin O'Connor, Oded Fehr
PLOT: An adventurer, a klutsy librarian and her cowardly brother race to an ancient Egyptian city and mistakenly awaken a mummy.
QUOTE: I love the whole sandwall trick....it was beautiful......bastard.
OSCAR NOMS: Best Sound
OSCAR WINS: Nil
LOVE: The special effects but hate those bugs
FAVOURITE SCENE: When the heros go up in a rickety airplane flown by Bernard Fox
FAVOURITE CHARACTER: Jonathan Carnahan (Jon Hannah)
TIDBITS: Brendan Fraser almost died when doing the hanging scene. the rope was too tight and he woke up on the ground. That really is Arnold Vasloo all wrapped up at the beginning of the film and he was freaking out since he suffers from claustophobia. Oded Fehr, who plays a (hubba hubba) hero riding on horseback, couldn't ride and was scared of the horses.
SIX DEGREES (MORE OR LESS) OF SEPARATION: Brendan Fraser starred with Christopher Walkin (Blast From the Past) starred with Anthony Zerbe (The Dead Zone) who starred with Paul Newman (Cool Hand Luke). Paul Newman starred with....til Saturday:)