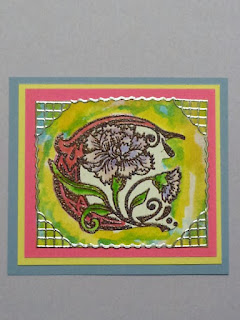 ...Ralph Bellamy to Ginger Rogers in ... 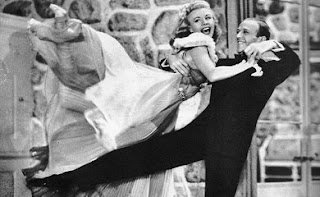 DIRECTOR: Mark Sandrich
STARS: Fred Astaire, Ginger Rogers,  Ralph Bellamy
PLOT: Fiance seeks out psychiatrist(Fred) to find out why his gal keeps putting marriage off. When the gal falls for the psychiatrist, he hypnotizes her to hate him which works all too well and to his regret.
QUOTE: Men like him should be shot down like dogs! Shot down like dogs!
OSCAR NOMS: Art Direction, Musical Score, Best Song-"Change Partners"
OSCAR WINS: nil
LOVE: The Dancing!
FAVOURITE SCENE: When they dance The Yam! Fred takes Ginger and they dance around the tables as he lifts her from one table to another...effortless looking.
FAVOURITE CHARACTER: Amanda Cooper (Ginger)-she is too funny
TIDBITS: Fans wanted these 2 to kiss finally so at long last it happened, in slo-mo much to Fred's dislike as he hated mushy scenes.
SIX DEGREES (MORE OR LESS) OF SEPARATION: Fred Astaire to Judy Garland (Easter Parade) to Liza Minelli (her daughter) 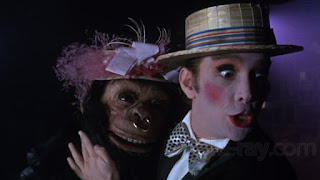 DIRECTOR: Bob Fosse*
STARS:Liza Minelli*, Michael York, Joel Grey*, Marisa Berenson, Helmut Griem
PLOT: Young, bohemian, American girl is the main star of the Kit Kat Cabaret falls for a young Britsh, writer amid the up and coming Nazi Regime.
QUOTE:  What is "Bumsen?" Knowing what that word is, I asked my Aunt when she was visiting from Germany. She was shocked. My mom had no clue and my aunt had to tell her. I thought my mom was going to make me wash my mouth out with soap-heheheeeee. I am evil at times
OSCAR NOMS: Best Picture, Best Screenplay
OSCAR WINS: Director*, Best Actress*, Best Supporting Actor*, Art Direction, Cinematography, Editing, best Score & Best Sound.
LOVE: The story- a mix of gaiety and fun but with impending doom.
FAVOURITE SCENE: When the MC sings to his sweetheart, a gorilla. You think it is funny until the end when it shows how menacing it truly is.
FAVOURITE CHARACTER: The M.C.
TIDBITS:  Apparently the character of Sally Bowles is based on Jean Ross who led quite the life  but was not as loose as the Sally Bowles character according to her son.
SIX DEGREES (MORE OR LESS) OF SEPARATION: Liza Minnelli to Judy Garland (Mother) to Marlene Dietrich (Judgement at Nuremberg) to Gary Cooper (Morocco) to.....
Posted by Birgit at 4/04/2016