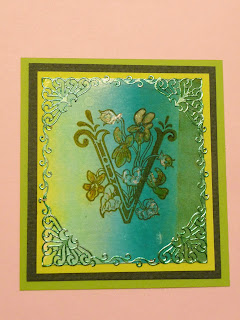 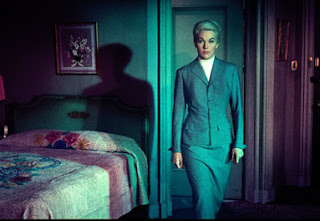 DIRECTOR: Alfred Hitchcock
STARS: James Stewart, Kim Novak, Barbara Bel Geddes, Tom Helmore
PLOT: An acrophobic detective is hired to watch his friend's wife. He slowly falls in love with her and becomes obsessed to have her just as she is obsessed with the notion that she is the reincarnation of a long dead woman.
QUOTE: One final thing I have to do.....and then I'll be free of the past.
OSCAR NOMS: Best Art Direction (B & W), Best Sound
OSCAR WINS: Nil
LOVE: The directing-it is Hitch after all and the use of colour to enhance a scene
FAVOURITE SCENE: When Scottie sees the transformation of Judy into Madeleine
FAVOURITE CHARACTER: Scottie Ferguson (James Stewart)
TIDBITS: The film did poorly when it came out and Hitchcock blamed Stewart because he was too old. This film is now considered one of the best films ever made and is usually in the top 5. Hitchcock removed this film from circulation for 30 years along with 4 others (Rope, Rear Window, The Trouble With Harry, The Man Who Knew Too Much-56 version) as a legacy for his daughter. All of these films except the Trouble With Harry starred James Stewart.
SIX DEGREES (MORE OR LESS) OF SEPARATION: Alfred Hitchcock directed Paul Newman (Torn Curtain). Paul Newman starred with Tom Cruise(The Color of Money) and Tom Cruise starred in.... 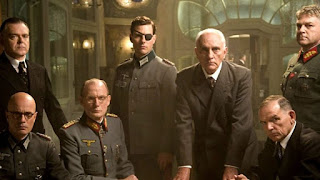 DIRECTOR: Bryan Singer
STARS: Tom Cruise, Bill Nighy, Tom Wilkinson, Kenneth Branagh, Terrence Stamp, Thomas Kretschmann
PLOT: The true story of Col. Claus Von Steuffenberg's attempt, with many others, to assassinate Hitler and overthrow the government to take control of the country.
QUOTE: we have to show the world that not all of us are like him. Otherwise, this will always be Hitler's Germany.
OSCAR NOMS: Nil
OSCAR WINS: Nil
LOVE: the acting-intense. The truth that this really did happen.
FAVOURITE SCENE: When Von Steuffenberg and his aide are setting up the bomb.
FAVOURITE CHARACTER: Von Steuffenberg(Tom Cruise)
TIDBITS: Germany, very fearful of cult religions (understandably) were hesitant in letting Tom Cruise stay and work in Germany since he is an avid nut for the freakish "religion" called Scientology. Due to the wrong treatment during the film development, some scenes were ruined so they had to be reshot after the film was technically done.
SIX DEGREES (MORE OR LESS) OF SEPARATION: Tom Cruise starred with Paul Newman (The Color of Money) who starred with Steve McQueen (Towering Inferno). McQueen starred with Horst Bucholtz (Magnificent 7) and Horst starred with.... who could that be??
Posted by Birgit at 4/26/2016