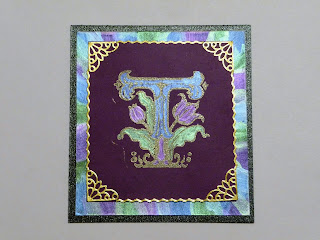 ....Rita Hayworth starred and married Orson Welles (Lady From Shangai) and he starred in... 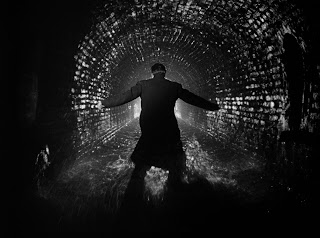 DIRECTOR: Carol Reed
STARS: Joseph Cotton, Orson Welles, Alida Valli, Trevor Howard, Bernard Lee
PLOT: A down on his luck author comes to Vienna at the invite of his friend only to learn that his friend had died. He meets his friend's girlfriend and finds himself knee deep in intrique and the black market.
QUOTE: In Italy, for 30 years under the Borgias, they had warfare, terror, murder and bloodshed but they produced Michaelangelo, Leonardo Da Vinci and the Rennaissance. In Switzerland, they had brotherly love-they had 500 years of democracy  and peace and what did that produce? The Cuckoo Clock (actually it was invented in the Black Forest but who cares..great quote!)
OSCAR NOMS: Best Director, Best Film Editing.
OSCAR WINS: Cinematography (B & W)
LOVE: The Cinematography, The location shooting and the music! (The music became a hit)
FAVOURITE SCENE: The sewer scene-all the camera angles throughout the film-brilliant!
FAVOURITE CHARACTER: Harry Lime (Orson Welles)
TIDBITS: Orson was a bad boy and instead of  coming to the set to shoot the scenes in the sewers, he took off for 2 weeks in Europe. They shot around him by having a stand in for some long shots. The  fingers coming from the sewer grate is actually the director's. When Orson appeared he didn't want to go into the sewer at all so they built a set in England to film his scenes.
SIX DEGREES (MORE OR LESS) OF SEPARATION: Joseph Cotton starred with Jack Lemmon (Airport '75) who starred with Walter Matthau (Grumpier Old Men). Walter Matthau starred with Goldie Hawn (Cactus Flower) and she starred with Kurt Russell (Swing Shift). Kurt Russell starred in.... 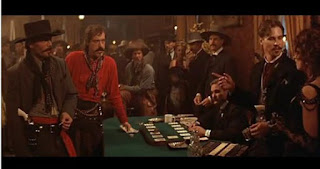 DIRECTOR: George P Cosmatos (actually Kurt Russell). Kevin Jarre (Fired)
STARS: Kurt Russell, Val Kilmar, Sam Elliott, Bill Paxton, Harey Carey Jnr, Dana Delaney
PLOT: The Earps come to town, meet up with Doc Holiday, clean up the town of Tombstone and have that gunfight at the OK Corral. You see Wyatt Earp continue to find the men who killed his brother.
QUOTE: Oh, Johnny, I apologize; I forgot you were there. You may go now.
OSCAR NOMS: Nil
OSCAR WINS: Nil
LOVE: The actual correctness of some key events (others may not be as much but..it's a film) and the dialogue of Doc Holiday
FAVOURITE SCENE: When Doc Holiday meets Johnny Ringo
FAVOURITE CHARACTER: Doc Holiday (Val Kilmar)
TIDBITS: Doc Holiday really was that cultured, acerbic and bad ass. The scene when Wyatt Earp just walks right into the blazing bullets and never gets hit..is true.
SIX DEGREES (MORE OR LESS) OF SEPARATION: Harry Carey Jnr starred with John Wayne (The Searchers) and John Wayne starred with..... Happy Weekend and the final week!

Oh in case you want to listen...here is the Harry Lime Theme as it is often called