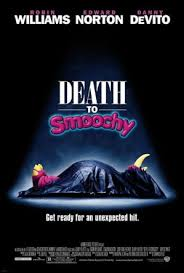 Yup-It is the second Friday of the month and Mock and the Armchair Squid have started a film society where we watch a film each month and review it. Last month we all chose our own films (mine was "Strangers On A Train") and then we were to pick a film from one of the others and critique the film they chose.  Toi Thomas chose "Death To Smoochy".

This film came out in 2002 and stars Robin Williams, Edward Norton, Catherine Keener and Danny De Vito who also directed. It royally tanked at the box office and was given nasty reviews. Robin Williams was nominated for a Razzie but thankfully they gave it to the deserved Hayden Christiansen for his portrayal of Darth Vader-more like a whiny Dr. Evil but oh well.

I think people didn't take well to Robin Williams playing a big A-hole. It is also a very caustic look at the behind the scenes look at a kid's show. It has since been getting a cult following and I always wanted to see this film and see if it is as bad as they say.

I enjoyed it! This does mean that yes I like bad ass language which there is allot in this film and I love the dark style of this film. It doesn't pull any punches since we all wish that purple dinosaur would be caught inflagrante delecto, with the purple teletubbie. The acting is not A1 as there is some over the top style but I didn't mind it and Robin always saves the day with his wicked one liners. I enjoyed the late Vincent Shiavelli who comes in late at the scene and seems to suffer from narcolepsy. The writing is wicked and I never thought I would see a children's ice capade  with a singing Wagnerian Valkyrie, Nazis and death but it was all good:) The plot seemed to go a little off near the end (see what I just wrote) but overall I give it a good  thumbs up.

My favourite scene is when Robins Williams is dancing through the city a la Gene Kelly.  I am glad I saw this film finally and it was filmed in Toronto and Hamilton!

Oh If anyone can help, I can't seem to leave a comment for Toi and yet I chose her film. When I tried to connect through Google plus my computer froze-grrrr. Since I am not computer savvy any help would be appreciated:)

PS My A to Z is the previous Post-I for "John Ireland" :)