R is for Rin Tin Tin 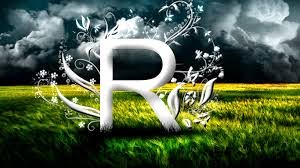 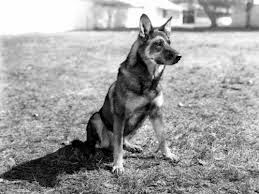 Marriages: None that I know:)

I am not kidding about this one-this is the first Doggie superstar that literally saved Warner Bros. from bankruptcy! He was found in a German dugout in Lorraine, France with his mom and 5 siblings. The poor mom was half starved and the pups were only 5 days old. Lieutenant Lee Duncan saved them, nursed them back to health and decided to take 2 of the pups back home to the U.S. He named them Nanette and Rin Tin Tin after French Puppets that the French kids would entertain the soldiers with. Poor Nannette caught distemper and died en route but Rin Tin Tin survived the trip. Duncan loved the dog and started training him from the beginning, and noticed this dog was highly intelligent plus very athletic. He started showing the dog in shows and was noticed by someone who worked at Warner Bros. The doggie was hired! The newly formed Warner Bros( 1923) were impressed that Rin Tin Tin could get the job done in one take and that he was a new dog breed to the average American since they were not really aware of German Shepherds at this point. His salary jumped from $1,000 a week to $6,000, he had his own chef prepare hamburger and steaks plus musicians played music while the dog ate to ease his digestion. Rin Tin Tin's films were big money makers and started the career of Darryl F Zanuck since he wrote many of the films. Even though the plots were very similar and everyone knew Rin Tin Tin would save the day, he received over $1,000 fan letters a week! Duncan took so good care of him that, at one point Duncan's wife wanted a divorce and named the poor dog as a co-respondent. Rin Tin Tin even had his own radio show which started in 1930-he barked his way to the top. In 1932, he passed away peacefully and many accounts say that it was in Jean Harlow's arms  but I also read that he just passed away with Duncan very nearby which sounds more plausible. Due to careful breeding, there are still descendants of Rin Tin Tin today. Lee Duncan made $5 million and died in 1960 a happy man.

Oscar Nominations: Apparently, it was found in old records that Rin Tin Tin won the first Oscar but the newly formed Academy thought they would lose  respect if the first Oscar went to a dog so they gave it to the runner up-Emil Jannings!